Ueno is synonymous with Ueno Park, Ueno Zoo and a number of museums. However, Ueno is also a huge shopping area. It is one of the major centers/railway hubs within Tokyo similar to Shinjuku, Shibuya, Ikebukuro or Otemachi (Tokyo Station).

Ueno is historically located in the shitamachi area, the working class area of Tokyo. I always have the feeling that everything is just a little bit more dated in Ueno than elsewhere in Tokyo. The shops tend to be here for a longer time, the department stores are smaller and the buildings older. For a history buff as myself, that is actually a good thing.

This article lists my top recommendations in Ueno. Instead of recommending you to go to Ueno Park, I am suggesting specific places within and outside the park. Also check out my other articles about this area.

In the south of Ueno Park lies one of the major lotus ponds in Japan. It is divided into 3 separate ponds with only the southern one being the lotus pond. The northern one is the Duck Pond and the western one is the Boat Pond. At its centre lies Benten Island on which you can find Benten-do temple that is dedicated to Benzaiten (one of the lucky gods, popular in the shitamachi areas of Tokyo). Historically, this place used to be just a cove of Tokyo Bay more than 2000 years ago. The pond remained after the sea withdrew. Thanks to this geographic feature it was chosen as the location for Kan’ei-ji temple. The best time to visit this pond is in summer (July and August) in the early morning hours, as the flowers already close themselves around noon. In winter the lotus flowers are all withered and the pond gives a pitiful impression, beautiful in its own way of course.

One of the oldest (large) buildings in Tokyo. It is one of the remnants of the once glorious Kan’ei-ji temple, without which there would be no Ueno park today. The temple is set in a background of greens, with a platform overlooking a circle made from pine tree. This circle is called the pine tree of the moon (tsuki no matsu in Japanese) made famous by Ukiyo-e artist Hiroshige. Read more.

The black gate in Ueno is an ominous, powerful gate reeking of authority. It is one of two remaining gates of the Edo-era feudal lord mansions in the capital. It is not clear when exactly the gate was built, but the concensus is late Edo period, likely late 18th or early 19th century. This gate is designated as an important cultural asset in Japan. Read more.

The oldest national museum and largest art museum in Japan, and even one of the largest art museums in the world. The Tokyo National Museum was established in 1872 and brings together five exhibition buildings. It has one of the best collections of Japanese art, as well as Asian art. You can easily spend several days in this museum.

A large shopping street along the railway tracks near Ueno Station famously known as one of the main black markets during World War II. Another theory puts the etymology of the street in the many candy stores that were popular here in the early post-war years (ameya means candy store). It can get awfully crowded on weekends with way too many tourists. The official page lists 181 shops, some traditional, but most are not.

This shrine also used to belong to the earlier mentioned Kan’ei-ji temple. It was built in 1627, then rebuilt in 1651. This temple enshrines the first Shogun of the Tokugawa Shogunate, Tokugawa Ieyasu (1543–1616, reign as shogun: 1603–1605). The Tokugawa’s used a lot of gold to show their power during those days, and that is one of the main things that jump at you when you visit this shrine. The shrine, karamon (Chinese style gate) and the sukibei wall are all from 1651. It reopened in 2014 after five years of renovations, making it shine like never before.

Built to preserve the culture and customs associated with shitamachi, more specifically the life in Tokyo from the late 19th century until early postwar Japan, the Meiji (1868-1912), Taisho (1912-1926) and early Showa periods (1926-). Read more. 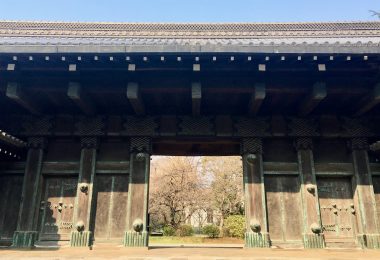