This shrine is mainly famous for safe childbirth. I included it into my seven lucky gods pilgrimage in Ningocho, but I felt that this shrine would need its own article. It might feel a bit out of place on this Old Tokyo website as it has been rebuilt in 2016, but its history goes way back.

This shrine is actually a branch of a shrine in Kyushu (Kurume), founded after the defeat of the Heike clan at the battle of Dan-no-ura in 1185, a major sea battle of the Genpei War. After this defeat, the then 6-year old emperor Antoku and his mother jumped to their death in the sea. They carried with them a sacred sword to take with them to a palace they believed to be at the bottom of the sea. This sacred sword is one of the three imperial treasures that symbolize the legitimacy of the throne.

The Suitengu Shrine was built to pray for the souls of emperor Antoku and his mother. The child emperor and water became subsequently connected to pregnancy and birth with many visitors praying for easy and safe childbirth. The shrine in Tokyo was established in 1818 by the ninth daimyo of the Kurume domain (associated with Chikugo Province in modern-day Fukuoka Prefecture on Kyushu island).

At this shrine you will encounter many expecting mothers and children on weekends. You can buy a white cotton cloth consecrated at the altar that can be used as belly-bands to protect the abdomen. This belly-band is on sale for JPY 4000 (price last checked in August 2017) at the shrine shop on the right hand side of the shrine. The procedure to buy such a belly is that you fill out a small sheet of paper with the expecting mothers name and address that will then be placed in the shrine. Please note that everything in this shop is in Japanese.

The shrine is specifically connected to childbirth through the following two customs:

You will find a statue of a mother dog and her puppy where everyone will want a picture (it is located on the left hand side on the shrine grounds). Since the Edo period, people in Japan believe dogs bear young easily and all of their puppies grow to be strong.

The dog statue at Suitengu Shrine

The shrine was actually built for a Buddhist deity called Varuna (called “Suiten” in Japanese buddhism). He is one of the twelve Devas who are found in or around Buddhist shrines. However, when Buddhism and Shinto deities were separated in the Meiji era (1868-1912), Varuna was changed to Amenominakanushi.

Benzai-ten, the goddess of music and charm, is worshiped here as well in the small red shrine at the left side on the shrine precincts. Benzai-ten (often referred to as Benten) is the only female presence among the 7 lucky gods. She is also a provider of learning and wealth.

Due to this connection to childbirth, you will find several shops in the area that cater to expectant mothers.

They have put a building over the stairs that lead you to the shrine, so entering feels a little bit counter intuitive. When you exit the Suitengu-mae Station (exit A5), you will see the back of the shrine, which means you will need to walk a bit along the big road and then go left in order to enter.

Closest station:
1 minute walk from the A5 exit of Suitengu-mae Station (Hanzomon line) or 3 minutes walk exit from the A1 exit of Ningyocho Station (Hibiya line).

When to best visit? All year round. The Shrine’s annual festival is held on 5 May. There are several smaller festivals held through the year.

Why visit? Brand new shrine in Tokyo (rebuilt in 2016), but with a lot of history.

Places to visit or things to do in the area? Right in the Ningyocho area with Amazake-Yokocho or you can visit other lucky god shrines when you are in the area. 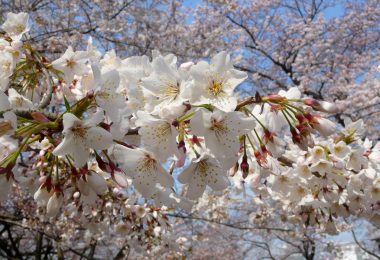 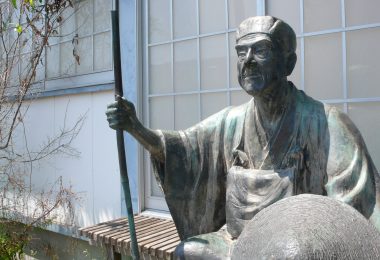