Sengakuji is a Sōtō Zen Buddhist temple established in 1612 in Minato-ku near Shinagawa. It has probably the most famous story of all the temples in Japan: the Akō incident of the 47 Rōnin.

On a sunny December afternoon I embarked on a pilgrimage to this temple to pay my respects to the glorious samurai who embody the concept loyalty. I read accounts on how small the temple grounds are, so I was prepared that this could be a very short visit. Visiting the temple, the graves and the museum took me 1 hour, but if you are in a rush and just want a brief look at the graves, you can be out in under 10 minutes.

Akō incident of the 47 Rōnin
The Akō incident is a historical event in the early 18th century in which a group of leaderless samurai (called rōnin, in this case also referred to as akōrōshis) avenged the death of their master. Their master Asano Naganori, feudal lord of Akō (in present Hyōgo prefecture), was forced to perform ritual suicide (seppuku) after a spat with a court official named Kira Yoshinaka. The group of rōnin had such a strong feeling of injustice about this situation that out of loyalty for their master they killed Kira Yoshinaka, knowing very well that they would be forced to commit seppuku themselves as well. And so it happened, all 47 of them died for their master.

I visited right before the 14th December festival called Akōgishisai that commemorates the 47 rōnin. While visiting on festival day is always special, I opted to visit the graves in peace and quiet.

The graves of the 47 rōnin are the main attraction point of the temple. Also of interest is the Head Washing Well that you pass on your right hand side on the way from the temple to the graves, where the head of Kira Yoshinaka was washed before it was laid in front of Asano Naganori’s grave.

The graves of the 47 Rōnin

A little background is probably necessary to fully appreciate the various graves on site. Two graves stand out for a reason. One of them is the grave of chief retainer Ōishi Kuranosuke Yoshitaka (hereafter Kuranosuke), the ringleader of the whole affair who united the 47 samurai to avenge the death of their master.

Kuranosuke was the de facto chieftain of Akō province. He was running its affairs in an effective and smooth manner as his lord Asano Naganori left the governing to his vassals. It is on this point that it is said that Kuranosuke failed in his responsibilities to make sure that his lord got the proper training and education, which eventually lead to a poorly executed attack that became Asano’s demise. Through his demise Kuranosuke also lost everything, giving him the motivation to take it out on Kira Yoshinaka, even if it meant giving up his own life. Nevertheless, his grave in the right corner is the most celebrated of all, with the largest wooden shed and most drinks and incense.

There are 2 graves that have a wooden shed. The grave one the left is that of Kuranosuke’s son Chikara who was 16 when he committed seppuku. He received the choice by his father to stand by him or leave. He choose to stay, his young age made it all the more dramatic.

Asano’s grave is very plain and outside of the enclosure. Not as popular as the grave of Ōishi Kuranosuke Yoshitaka.

Just after you enter through the gate towards the graves, an elderly gentlemen will entice you to buy some incense. This is not compulsory, but due to the location just after the gate feels a bit like an entrance fee. You will see that almost anyone will buy incense, and you can see that the incense sticks are plentifully deposited at each grave.

Museum with wooden statues of the 47 Rōnin

A visit to the temple and the graves is not complete without stopping by the small museum. With small I mean really small. There is just one room in the Memorial Hall and another room in the Gishi Mukozokan on the 2nd floor (the building at the other side of the pathway) .

I was note sure whether I should enter this museum as the price seemed pretty steep for its size. 500 yen for one adult. It also seemed most people seemed to skip the museum, which meant I was the only person there. But I am glad I entered, as the museum holds wooden statues of each of the 47 Rōnin that give a relatable face to each of them. It really makes them come alive.

Five of the statues are made by Sekiran and the rest were completed by his disciples. They were presented to the temple during the Meiji period (1868-1912). The statues of Kuranosuke and Chikara are in the Memorial Hall, the other 45 are in Gishi Mukozokan. (photos not allowed in the museum).

The museum has many small items related to the 47 rōnin event, including scrolls, letters, etc. One large exhibit item is the Shakahasso Gion Shoja Mandala, a large scroll that is in fact unrelated, but was often exhibited together with 47 rōnin items in the past. Please note that there is just a little bit of English information, most of it is in Japanese.

Observation about the Akō incident

When researching the Akō incident I came across many articles pointing out that the story as we know it now is quite different from what actually happened. I guess that is true for most historical events that make it into the cultural conscience of a nation. I feel it is much more important how the story resonates with the population and what it means for how people look at themselves. I feel it is about the expression of something that was already there to begin with. The continuous stream of mainly Japanese visitors to these graves signify the story still touches the hearts of many.

In order to learn more about the Akō incident, check the wikipedia article which is pretty comprehensive. 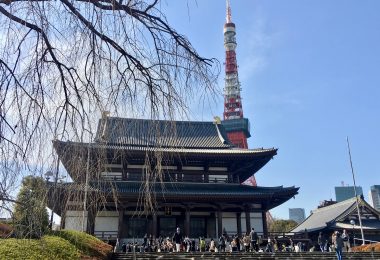