Ochanomizu is an old neighborhood in Tokyo that has been a place for higher education since feudal times. This area is located right next to Akihabara and about 2 km north of Tokyo Station. This area guide focuses on the area within 5 minutes walking distance of Ochanomizu Station. The area north of the station is called Yushima, south is called Kanda.

Whenever I ask someone about Old Tokyo, they first push me towards Asakusa, then they guide me towards Ochanomizu. At first I did not appreciate the area that much because I felt it was too modern and too business like. Many big modern buildings such as the skyscraper that houses JAXA’s Tokyo office. But then, bit by bit I started to discover the remnants of an older area, which is actually very prominent once I started listing up all there is to see. As in Ginza, the old character also has a distinct Western style. 5 out of 8 places I introduce in this article are not traditional Japanese. It shows how this city quickly embraced Western styles and cultural elements after it opened up at the end of the 19th century.

Tokyo is home to 144 universities (source) and 740.000 university students (source). Tokyo stands out in Japan as the number one place for students, with its student population over 3 times as big as Osaka. If you take into account neighboring Kanagawa, Saitama and Chiba prefectures, the student population in the Greater Tokyo region is over one million. Student life is pretty distributed all over the city with pockets of large student populations here and there. Examples include Waseda/Takadanobaba (for Waseda University and Gakushuin University) and Hongo (Tokyo University). However, Ochanomizu is home to a large number if higher education institutions from way before. Currently Meiji University, Tokyo Medical and Dental University and Juntendo University are the main ones (not Ochanomizu University as the name might suggest, Ochanomizu University has its main campus in Ōtsuka after its campus in Ochanomizu was destroyed).

Another feature of this area is that there are several shopping streets that are dedicated to one item. Sports Goods Street, Ski Street and most famously the Guitar Street/Music Instrument Street. Further to the south is also the Jimbocho Book Town. A couple of traditional shopping streets can be found near Kanda Station, further to the east.

The origins of the area are as a source for tea water for the shogun (ochanomizu literally means tea water), but don’t expect any of that when visiting this Tokyo neighbourhood.

Yushima-seidō (established in 1690, its predecessor in 1630) is the birthplace for several renown universities in Tokyo and seen as the origin of all education in Japan. It is currently the most famous Confucian temple in Japan. It is often referred to as the Tokugawa bureaucrat training centre due to many graduates later joining the Tokugawa Shogunate, the sort of government of Japan during the Edo period (1603-1868). The current building dates from 1935, one of the gates dates from 1704.

Address: 1-4-25 Yushima, Bunkyo-ku, Tokyo (no 1 on map below)
More information: read my article on Yushima Seido

Classical style hotel founded in 1937 that has become a landmark for the area. The hotel is pretty small, with only 35 rooms, and quite famous, playing host to big names in Japanese literature such as Yukio Mishima (1925-1970). The hotel has 7 restaurants and bars, a lot in comparison to how few rooms are available. One of these restaurants is a famous tempura restaurant that developed into one of the foremost tempura restaurants in Tokyo. It is actually here that tempura developed in the fine dining food that could stand the competition with sushi and other fine Japanese dining experiences.

Address: 1-1 Kanda Surugadai, Chiyoda-ku, Tokyo (no 2 on map below)
More information: read my article on Hilltop hotel and tempura

Manseibashi station was the most important train hub in Tokyo at the start of the 20th century, but is no more. Luckily, the bridge connected to the station is still there. The elevated bridge in red brick from 1912 houses a stylish shopping centre (mAAch ecute) and cool train platform style cafe (cafe/bar N3331).

Address: 1-25-4 Sudacho, Chiyoda-ku, Tokyo (no 3 on map below)
More information: read my article on Manseibashi

Kanda Myōjin (often referred to as Kanda Shrine) was established in 730. Like many shrines in Japan it has been continuously rebuilt until 1934, when it was reconstructed with reinforced concrete. The main shrine building was one of the first Shinto shrines to use this material to make it into a more sturdier structure to protect it from fire and earthquakes. But rather than the main shrine building, Zuishin-mon (built after the World War II), the two-story main gate of the shrine that greets you in its colorful beauty, is the visual image for which this shrine is famous. Being very close to Akihabara, it received the influence of both the electric town and manga/anime.

Address: 2-16-2 Soto-Kanda, Chiyoda-ku, Tokyo (no 4 on map below)
More information: read my article on Kanda Myōjin

If you cross Ochanomizu Bridge (1931) after getting out Ochanomizu Station, you enter Guitar Street, or also called Musical Instrument Street as there is a bit more than just guitars. While the majority of shops do specialize in guitars (and bass guitars), there are also shops that specialize in violins, wind instruments and (electric) pianos.

The major instrument shops in Ochanomizu were established in the 1930s: Shimokura (1937), Ishibashi (1938) and Taniguchi (1937). These stores established Ochanomizu as the place to go for western musical instruments that were popular in the dance halls of Ginza.

Location: starts right across the Ochanomizu Bridge from Ochanomizu Station (no 5 on the map below)

The Nikolai Cathedral is the main cathedral of the Japanese Orthodox Church. Completed in 1891, it was severely damaged during the 1923 earthquake and partially rebuilt with a shorter bell tower. It is an exotic building in Tokyo that is very authentic at the same time, unlike the fake wedding chapels in Omotesandō.

Right next to Kanda Myōjin is the Imasa House, built by the Endo family in 1927. Imasa means that it is a combined store with both commercial area and living area. The building is considered valuable as it uses high quality wood and construction methods from the Edo period (1603-1868). The house functions as a cafe, only open during weekdays (10:30-16:00).

Hijiri Bridge (literally Saints bridge) is the most famous bridge over the Kanda River. It connects 2 holy places, the Kanda Myōjin shrine and Nikolai Cathedral. Built in 1927, this place is mainly popular as a good spot to watch various train lines pass by.

The buildings are built fairly close to the river and the bridges are criss-crossing the river. There are 6 bridges in total in less than 1 km of which 2 go over the river diagonally. The photo on top of this article shows the view over the neighbourhood from Hijiri bridge.

Location: bridge next to Yushima Seido (no 8 on the map below) 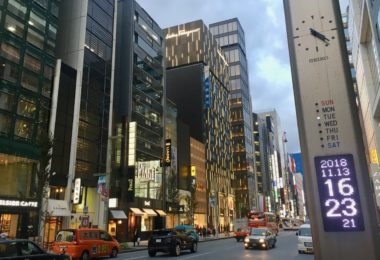