Nezu shrine is both old and beautiful. With its red buildings set among lush greens, it stands out compared to other shrines in Tokyo. It was established in 1705 and most of the buildings are from this period. Not Tokyo’s oldest, but close. Legend puts its establishment almost 1900 years ago during the reign of Emperor Yamato Takeru (12th Emperor of Japan), making it in fact the oldest place of worship in Tokyo. However, the shrine was first located in Sendagi and unfortunately nothing is left from those days.

I would go as far as to call Nezu shrine Tokyo’s most beautiful shrine. There is actually not that much competition in terms of Shinto shrines. In Tokyo you have so called “10 Shrines of Tokyo” and in addition Meiji Shrine, Yasukuni Shrine and Ueno Toshogu Shrine. All other shrines are not up to the same level.

The shrine has been designed after the Toshogu Shrine in Nikko. It is built in what is called the Gongen-zukuri style (also called ishinoma-zukuri). This signifies that the worship hall (haiden) and the main sanctuary (honden) are interconnected under the same roof in the shape of an H. This was done by instruction of the 5th Shogun Tokugawa Tsunayoshi (in office 1680–1709), who ordered the relocation of this shrine to celebrate choosing his successor, 6th Shogun Tokugawa Ienobu (in office 1709–1712).

The Karamon gate is connected to this sukibei wall. These Karamon gates are also found at other buildings in Japan, they are used at the entrances of castles, Buddhist temples and Shinto shrines, and symbolize authority, strengthening the connection of this shrine to the authorities of the day, the Tokugawa Shoguns.

Probably more famous than the main shrine buildings are the torii gate tunnel and the viewing platform overlooking the main shrine and a beautiful pond with koi. Otome Inari Shrine is a separate shrine on the temple grounds of Nezu Shrine. Otome means maiden and many women come here to pray for a good marriage.

One of Otome Inari Shrine’s main features is the torii tunnel. Literally everyone compares it to Fushimi Inari Taisha in Kyoto, which is in my opinion not very serious. The torii tunnel in Kyoto is outright impressive and majestic, the torii tunnel at this sub-shrine in Nezu just adds to the character and beauty of this little shrine. You have other torii tunnels in Tokyo as well, for example at Hanazono Inari Shrine in Ueno park.

The Romon gate is the outer gate at the south of the shrine. It is in itself one of the highlights of Nezu Shrine. Especially with the little bridge in front, it becomes and ideal photo opportunity.

The Romon gate and bridge during a wedding ceremony

This two-storied gate was also built in 1706 as much of the rest of the buildings at the shrine. On the west side you also have the west gate, but that one is less impressive.

From mid-April until the beginning of May, the shrine holds the Tsutsuji Matsuri when around 3000 azalea bushes of different species are in bloom. The colors of these flowers range from white to pink, purple and red. Many visitors flock to the shrine at this time, and a lot of stalls sell all kinds of food and goodies.

During the Azalea festival at Nezu shrine

Stone of the Literary Greats and more

The shrine grounds feature many more small interesting spots, one of the most interesting for me was the Bungo no Ishi (Stone of the Literary Greats), which became famous as a couple of renowned authors such as Natsume Soseki and Mori Ogai (who both lived nearby) received inspiration after sitting on this stone.

There is actually also a second Inari shrine on the grounds of Nezu Shrine, it’s in the upper north-west corner and called Komagome Shrine. No red torii gates here, but only a large stone torii gate and stone stairs, it looks very aged.

A beautiful Noh Theather can also be found on the shrine grounds as at many other temples and shrines in Japan.

When to best visit? mid-April to early-May when the Azalea flowers are in bloom

Why visit? Tokyo’s most beautiful shrine. 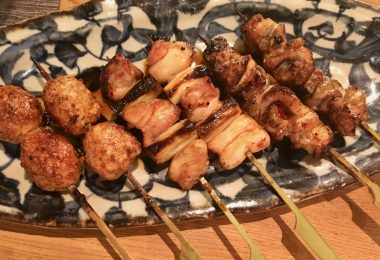