Kannon-ji temple is a Shingon sect temple established in 1648. The tsujibei wall is one of the enclosures of this temple, an original wall from the Edo period that is a recognized cultural asset in Japan.

Yanaka is touted as the place where the old Shitamachi atmosphere can still be felt and where many old structures still remain. Besides Yanaka Cemetery and Yanaka Ginza, I have been wondering which other spots have an intriguing history in this place. There are so many small and beautiful temples here (see my Yanaka temple walk) that I became interested to find out more about each temple and how they fit in Japanese history.

Small buddha statue next to the temple

Probably one of the most interesting stories of temples in Yanaka is the one behind Kannon-ji. This temple is strongly connected to the story of the forty-seven rōnin, one of the most captivating narratives in Japan, popularized in many plays and movies. It is one of the defining stories for Japanese loyalty, sacrifice, persistence, and honour.

Akō incident of the 47 Rōnin
The Akō incident is a historical event in the early 18th century in which a group of leaderless samurai (called rōnin, in this case also referred to as akōrōshis) avenged the death of their master. Their master Asano Naganori, feudal lord of Akō (in present Hyōgo prefecture), was forced to perform ritual suicide after a spat with a court official named Kira Yoshinaka. The group of rōnin had such a strong feeling of injustice about this situation that out of loyalty for their master they killed Kira Yoshinaka, knowing very well that they would be forced to commit ritual suicide themselves as well. And so it happened, all 47 of them died for their master.

Sengaku-ji temple in Minato-ku is the place where the forty-seven rōnin are buried and is most closely conected to the Akō incident. However, Kannon-ji is the temple where the revenge murder was plotted. Two of the rōnin (Chikamatsu Kanroku Yukishige and Okuda Sadaemon Yukitaka) were brothers of Bunryō, who was studying at this temple (named Chōfuku-ji at that time). Bunryō, who later became head priest of the temple, is said to have done all he could for the rōnin and facilitated meetings at the temple.

Getting through the gate onto the temple grounds, I kind of felt the temple to be rather plain (unlike many temples that are part of my temple walk). The dark-wooden temple building is surrounded by a graveyard. A couple of monuments and side-buildings can be found on the right hand side. No one was there, except one elderly Japanese gentlemen avidly taking photos of the place.

The memorial tower dedicated to the 47 rōnin is the pagoda on the right hand side of the temple. On the top part the sanskrit for the buddha in the 4 directions can be found. There is small signboard on the left hand side with the name of this memorial tower in Japanese: 赤穂浪士供養塔 (akōrōshi kuyōtō). This memorial tower dates from right after the incident in the early 18th century.

Another interesting part of this temple is one of the enclosing walls. Please note you have to exit the temple in order to have a good look, it is the wall on the left side of the temple. This wall is called the tsuji-bei wall, an original wall dating back from the Edo period (1603-1868). It is constructed by alternatively piling mud and tiles, creating a unique type of wall that can still be seen here and there in Japan. These walls used to be all over Tokyo and its amazing to think that only so little remained from the Edo period. The wall, measuring about 37.6 meters in length and over 2 meters tall, is protected as cultural property since 1992.

alternative view of the Tsuji-bei wall 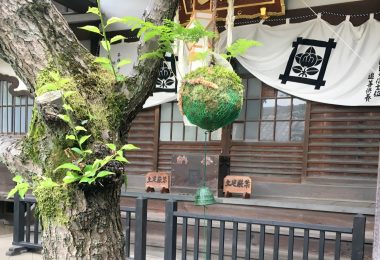