Kanda Myōjin (often referred to as Kanda Shrine) was established in 730. Like many shrines in Japan it has been continuously rebuilt until 1934, when it was reconstructed with concrete. It is located in Kanda (near Ochanomizu Station) since the early 17th century, right next to Akihabara.

Some websites list Kanda Myōjin as the oldest shrine in Tokyo, so I was very curious to take a closer look. A quick search reveals though that this is not really the oldest, the neighboring Yushima Tenjin Shrine beats it by more than 250 years. It is true though that Kanda Myōin is the oldest “important” shrine in central Tokyo.

The main shrine building was one of the first Shinto shrines to use concrete to make it into a more sturdier structure to protect it from fire and earthquakes. But rather than the main shrine building, Zuishin-mon (built after the World War II, photo on top of this article), the two-story main gate that greets you in its colorful beauty, is the visual image for which this shrine is famous. Painted vermilion and decorated with intricate gold and lacquered interiors, the gate sure stands out.

To get a good grasp of what this shrine stands for, we need to consider the deities being revered at this place. The shrine is more than a place to pray for anime characters. Three gods are worshipped at Kanda Myōjin of which one is a rather special kind. Taira no Masakado was a fierce 10th century warrior that tried to build his own empire in the Kantō area (to which Tokyo belongs) in defiance of the emperor in Kyoto.

His death was rather spectacular in that when his head was cut off in northern Kantō, it flew into the air all the way to Otemachi (the location of later Edo Castle and the Imperial Palace). The location where his head fell is still there and it became his grave (very close to exit C5 of Otemachi Station).

When Tokugawa Ieyasu took power in the early 17th century he was very aware of the popularity of the shrine and made it into shrine that would be the guardian of all the people of Edo (former name of Tokyo). Ieyasu moved the shrine to Kanda as he needed the space at the shrine’s location for his own expanding castle. However, some say that he was just uncomfortable having such a strong spirit near his castle.

The manga/anime and IT shrine

Kanda Myōjin is very close to the Akihabara district of otaku culture and received a big influence from this proximity. Akihabara first developed as the electric town of Tokyo, which led to the shrine promoting itself as protector of computers and electronic gadgets. Only here you can buy a talisman with the power to protect your computer against virus attacks.

Manga and anime came later, eventually leading to the character Nozomi Tojo from the popular anime Love Live! to become the shrines’s official mascot in 2015. The references to manga/anime are not that much present at the shrine except for a poster on the right hand side and the ema that often feature manga and anime characters.

Kanda Matsuri: one of the big 3 Tokyo festivals

The shrine’s festival, Kanda Matsuri, also shows the importance of the shrine. This festival was started in the early 17th century by Tokugawa Ieyasu to celebrate his victory at the Battle of Sekigahara. This festival is only held in odd-numbered years on the weekend closest to mid-May.

The festival consists of a long precession on Saturday and a parade with portable shrines on Sunday. The other two important festivals in Tokyo are Sannō Matsuri at Hie Shrine (mid-May on even-numbered years, so it alternates with the Kanda Matsuri) and the Fukagawa Matsuri at Tomioka Hachiman Shrine (every year mid-August).

At the end of 2018, the Edocco building opened to the public. It’s name refers to the original inhabitants of Edo (called Edokko) and stands for Edo Cultural Complex. This new facility commemorates the 1300th anniversary of the founding of the shrine.

The new complex mainly has halls that are used for events and exhibitions. A cafe and souvenir shop are located on the first floor.

The Otoko-zaka (male slope) used to provide a great view over the area, but much of that effect is long gone and it’s just a bunch of stairs now. I prefer the gentle slope of onna-zaka (female slope) in nearby Yushima Tenjin.

Best time to visit: avoid the large festival, unless you go for that occasion (weekend around May 15 of every odd year) 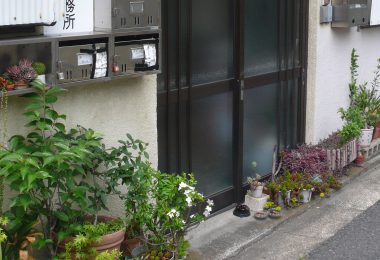