On a hot morning in August, I set out to visit Zenshoan temple. I heard they had an interesting collection of ghost scroll on display (only in August!), so I thought, let me have a look at that. Zenshoan temple itself is nothing special, the temple building is pretty generic, the kind of temple you find all over Japan. I arrived here after visiting Daienji next door, which is visually more appealing, so I was slightly disappointed.

At the entrance, you are greeted by 3 neatly arranged metal panels that inform you about the 3 famous people who have their grave at this facility. Not anyone that immediately rings a bell, even if you are a bit familiar with Japanese history. The main grave is of Tesshu Yamaoka (1836-1888), swordsman/master calligrapher, who established the temple in 1883. He was one of the most trusted retainers of Japan’s last Shogun Tokugawa Yoshinobu. Another prominent resident in the graveyard is Sanyutei Encho (1839-1900), one of the great rakugo story tellers. Rakugo is a form of Japanese verbal entertainment in which a storyteller sits on stage and without standing up he/she depicts a long and complicated comical story. The third grave is of Hirota Ryutaro (1892-1952), a famous composer.

The main prize of the temple is their collection of ghost scrolls (called yurei-ga in Japanese) that are on display only during August (each year). They are scary, really scary. The attention to detail of the ghosts faces and teeth, the dimly lit room. The fact that I visited when there was no-one there when I visited helped with making it the perfect eerie atmosphere. The 50 scroll paintings, most of which date back more than 150 years, were collected by the earlier mentioned Sanyutei Encho, who used to be a student at Zenshoan. It is said that he collected these scrolls to help him get inspired for the ghost stories he told during his rakugo summer performances.

Apart from the ghost scrolls, this place features another special element. In the graveyard you will find a golden buddha statue, which is rather uncommon in Japan. It towers over the cemetery and gives the place an unusual touch.

Entrance to the ghost scrolls exhibition.

After I came out, a group of tourists came in. Do not forget to take off your shoes!

The cemetery with the golden buddha. 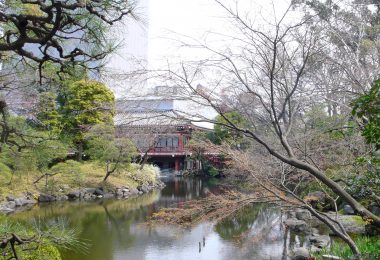