Fukutoku shrine is a Shinto shrine in Nihombashi Muromachi dating from the 9th century. It is a central site to visit in Nihombashi to get a good idea of the redevelopment of the area since the start of this century. This area of Nihombashi Muromachi in particular hosts many traditional shops and aims to retain an old Tokyo character, regardless of the shiny department stores and office buildings.

I have been pondering where the true heart of Nihombashi lies these days. Historically one could say that without a doubt that the Nihombashi bridge is the core. However, with the bridge being buried under another bridge it is not such an appealing sight.

Walking around both areas I think that the northern side is definitely the most interesting one. Not only have the COREDO Muromachi department stores been designed to blend into the area to evoke a feeling of a bygone Japan, the area around Fukutoku Shrine boasts quite a number of traditional shops and restaurants. I felt that the redevelopment of Nihombashi (called “revitalisation”) is also strongest here in the neighbourhood of Muromachi.

Fukutoku shrine is a very slick new-looking shrine, right between a number of tall buildings. While it has a history spanning over 1000 years, the current shrine building dates from 2014 when the whole area underwent a renewal.

The Shrine used to be rather important before the Edo period, but not a lot is left. Tokugawa Ieyasu (the first shogun during the Edo period) himself visited the shrine several times. The name itself refers to “good fortune”, but the shrine also goes by the name of Mebuki shrine, referring to newly budding oak trees that were there at one point in time.

There is a (small) garden right next to the shrine.

Interesting shops in the area

Nihombashi Muromachi is probably one of the areas in Tokyo with the most traditional shops that have a certain standing within Japan and offer products that are high in quality. Many shopping streets in Tokyo have plenty of traditional shops, but the ones in Nihombashi have been able to set the standard and often create a brand. Therefor visiting these shops is more like visiting a flagstore for a famous brand.

For example Yamamoto Noriten was established in 1849 and specialized in nori (seaweed). It grew into a large nori empire with over 100 stores in Japan and even one in Shanghai and Singapore. Their flagstore shop in Nihombashi offers a wide range of nori, such as Ajitsuke Nori (flavoured nori), their own creation. The shop is on the main street right across Mitsukoshi Department store.

Kanmo is one of the oldest shops in the area, established in 1688 by an immigrant from Osaka. It sells fish cakes and is especially famous for its hanpen (triangular boiled fish cake) and kamaboko (steamed fish cake). Hanpen is a common ingredient in oden, kamaboko is most famously known for its usage in ramen. They list an annual turnover of 530 million yen (ca USD 4.8 million, EUR 4.4 million), which is pretty impressive for such a small speciality shop. Next to the shop here in Muromachi, there is also a sales point in Takashimaya in Nihombashi and at Takashimaya in Yokohama.

There are many more shops to explore, such as traditional knives at Kiya (founded in 1792, in COREDO Muromachi 1) and toothpicks at Saruya (founded in 1704, in a nice little side-street). Great food is available from Kaneko Hannosuke (Edomae Tendon that has gone global: Edo-style tempura on a rice bowl) and Janoichi (Edomae sushi). For coffee, or rather ice-cream perhaps, Mikado Coffee is the place to be.

Be aware though that many traditional-looking shops are originally not from Nihombashi, but from elsewhere in Japan. Several crafts shops were also established in recent years together with the redevelopment of the area gaining speed. 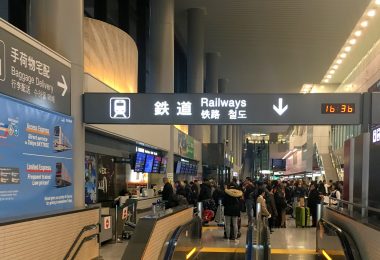