A journey to learn more about shitamachi should definitely include one address: the Shitamachi museum. It is located in the South-East corner of Ueno park and was built to preserve the culture and customs associated with shitamachi, more specifically the life in Tokyo from the late 19th century until the early postwar Japan, the Meiji (1868-1912), Taisho (1912-1926) and early Showa periods (1926-).

I was not sure what to expect of this museum before going there. While I was familiar with the shitamachi culture and the areas in Tokyo that reflect it best, I wondered what exactly they would show. An important element for me are the narrow streets, the food and the stray cats… in a real-life setting. So how to translate that into a museum?

The answer is two-fold, or better, divided among two distinct floors in this museum. The first floor is dedicated to a typical street and activities in shitamachi houses, while the second floor is dedicated to cultural aspects such as manners, utensils, children’s games, events and even a replica of a shitamachi cafe. It all looks very beautiful, but at the same time also a bit fake. I am a fan to see something in their original setting, and shitamachi houses and culture can still be experienced at several places in Tokyo, so why go to a museum?

Inside the nagaya house

Visually, the first floor (ground floor) is the most interesting one. They built a replica of a whole shitamachi street including a merchant house and a Nagaya house (lit. long house) that harbours a sweets shop and copper smith. It is all very life-like, including narrow streets with flower pots.

The shitamachi cafe. Unfortunately no coffee, but you will have puzzles to keep you entertained.

If you want to entertain kids, the second floor will be up your alley. Eye-catching here are the puzzles you can find in the shitamachi cafe, and the children’s games near the window. The events that took place during this timeframe are also exhibited (in detail), from the 1923 Great Kanto earthquake to the 1964 Tokyo Olympics. Also cool is the 1960 living room, including singer sewing machine and television.

Some of the games that are available to play with

While many of the exhibits and information panels are in Japanese, I was positively surprised to which extent material was prepared for foreigners. After entering, I was greeted by an elderly Japanese man who provided explanations in English. Apart from that, for each part of the museum on the first floor, a 2-page information sheet was available in English. On the second floor, there was limited translation on most of the panels, but I think to a sufficient level in order to enjoy the place.

A few notes though on the definition of shitamachi as it is used at this museum. The information panels on which areas in Tokyo are shitamachi and how the terminology shifted during the periods covered in this museum were unfortunately only in Japanese. According to these panels, the shitamachi of the Edo period is used, which are located within the shubiki line (line that defined the territory of Edo) and includes a part of Shiba, Kyobashi, Nihonbashi, Kanda, Shimoya and Asakusa. The replica of the shitamachi street feels to be closest to the Meiji era shitamachi with a one story Nagaya. The cultural aspects on the 2nd floor on the other hand seems to be more directed to the time just before and after the second world war, a period to which seniors visiting the museum still have a close memory to.

The museum helped me in order to get a better understanding of several of the details, in particular building materials, crafts, games that were prevalent during the high-time of shitamachi lifestyle and culture. But I feel shitamachi is more than this, and should also be observed in the many neighbourhoods that still allow you to experience it first hand. 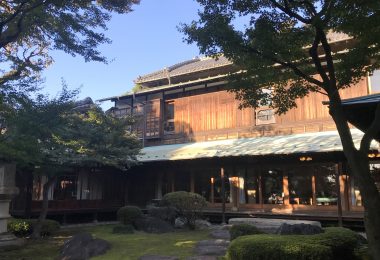