Dembou-in Teien, or Dembou-in garden is a quite large garden adjacent to the famous Senso-ji temple in Asakusa. While it is one of the most pretty places in this area, it is unfortunately only open during a limited time each year (from mid-March until early May). In 2017, it is open to the public from 10 March 2017 until 8 May 2017. It is in fact the private garden of Senso-ji Temple’s abbot. In the olden days it was only open to nobles.

The circuit-style garden is approximately 10,000 square meters and has as its main feature a large pond, divided in 2 parts. It is attributed to Kobori Enshu (1579–1647), who was a celebrated garden designer and tea-ceremony master, notable Japanese artist and aristocrat in the reign of the first shogun Tokugawa Ieyasu (1543–1616, reign as shogun 1603–1605). He is famous for his design work for gardens all over Japan. Famous examples are the Sento Imperial Palace and Katsura Imperial Villa in Kyoto.

The large study where you can get some free tea

You enter the garden through the building next to the Five-storied Pagoda. When you enter you will first be sent to the special exhibition (in 2017: a collection of large ema), after which you can continue to the garden. As it is a circuit garden, you will need to follow a specific route.

What is there to see in this garden?

One of the famous sights in this garden is from the farthest South-West corner where you see the pond, the large study and the Five-storied Pagoda in the background.

The sakura tree in front of the large study

Even with the huge crowds at Senso-ji temple, I found that there were not that many visitors at this garden. Likely due to the entrance fee and that it is not seen as a must-go item on an Asakusa itinerary. However, it is quite a good deal as for your entrance fee you can take a look at an exhibition and you will get some free tea.

Please note there are alternative ways circulating on how to write Dembou-in: Denboin, Denbouin, Demboin. Some people write it as Denpoin with a “p”, however the correct way to write it is with a “b”.

Entrance: JPY 300 (entrance through the building next to the pagoda, not through the entrance in Dembo-in street)

Why visit? Most beautiful temple garden in Asakusa, and a place to breath away from the busy Nakamise-dori and Senso-ji temple. 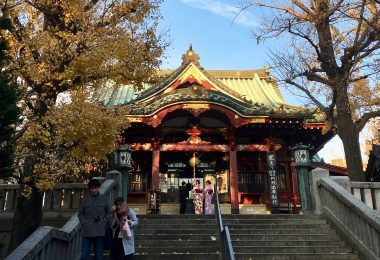