Japanese senbei (煎餅, often written sembei) are generally speaking floppy large and hard soy-flavoured rice crackers. They have their origins in China, although what is currently known as senbei has no resemblance to what was imported in Japan from the Tang Dynasty in the 8th century AD. No, what is now considered a senbei is a type of rice cracker that was introduced by a shop at Sōkajuku during the Edo period (1603-1868) in Saitama prefecture (neighbouring prefecture of Tokyo). Unfortunately, this shop is long gone, but you can taste senbei and see how they are made at several shops in shitamachi! Sōkajuku was a resting stop on the Nikkō Kaidō road (one of the 5 famous roads, called Gokaidō, connecting Tokyo with the provinces during the Edo period). The legend goes like this: a samurai asked at a dango shop to an old woman (called Osen) to bake a flattened dango (a dumpling made of rice flour). The rest is history.

A quick warning though, senbei are hard, very hard. I have times that I am worried that my teeth will crack by eating too many of these (mostly) salty delights, but I can’t help it, I keep going for more. Senbei are eaten as street food or as a quick snack. You will not find cafes where you can sit down and enjoy it in the same way as many other snacks such as waffles, pancakes and cake. It is rather something you might receive as a courtesy refreshment when visiting someone’s house.

While you have a number of classic senbei, these days they come in various shapes, sizes, and flavours. Oh, and they go very well together with green tea. Senbei are usually made by grilling rice-based flat rice-dough pieces. Historically, they were always grilled over charcoal.

Senbei are available all over Japan, but somehow they are also part of the shitamachi lifestyle. As a cheap street food they were/are a popular snack for the common man. All over Tokyo you will find senbei shops, but the area we see as shitamachi has the most and oldest shops in Tokyo. Let me introduce a couple of my favourite ones in Asakusa and Yanesen area.

Senbei are fried for your entertainment at Iriyama Senbei

At Iriyama Senbei, you cannot get closer to the original and classic senbei. At this store in Asakusa, they have only one type of senbei, the traditional round-shaped soy-flavoured senbei. The store was set up in 1915 and has since remained unchanged, protecting the original taste. You can see the whole process of making the senbei (great photo opportunity) and you can buy a fresh hot senbei (one piece for JPY 130).

A bit off the beaten track in Yanesen, you will find Kikumi Senbei Sohonten near Daienji. This store is here since 1875 and stands out with its square-shaped senbei and its beautiful store-front with large glass bowls. You can sample here more than one type of senbei. They are specialized in 4 types: soy (shouyu-senbei), chili pepper (tougarashi-senbei), green tea (cha-senbei) and sweet (ama-senbei).

The name of the store originates from the kiku ningyo displays that used to be there on nearby Dangozaka. Kiku ningyo are Japanese dolls from living chrysanthemums, a type of flower art in Japan. You can no longer see them over here, but thanks to those flowery dolls, this senbei store got started, trying to sell these visitors a snack and a souvenir to bring back home. From those days, they are offering the kiku arare, small bite-sized senbei in the shape of chrysanthemums.

This store is also interesting for selling bread next to senbei. Apparently, right after the second World War, it was difficult to get enough rice to make the senbei and the store experimented with making bread as it was much easier and cheaper to get their hands on wheat flour. Their regular customers liked it and since then bread is part of their merchandise.

Over the years I have been in Japan, I came across a huge variety of senbei, prompting me to even consider starting a website about them as I came to love them. A visit to any supermarket in Japan will amaze you on the variety of senbei that Japanese eat on a regular basis at home. What they consider to be senbei is also much wider than the above described rice senbei. The classics are baked pure rice senbei with a flavour coating: soy (shoyu), salted (shio), chili pepper (tougarashi), seaweed-wrap (nori), sugar (sarame). Also very classic are the fried senbei through a combination of soy sauce and sugar (introduced in the 1960s): kabuki-age (named after the kabuki theater emblem, on which the design is based), bonchi-age (especially famous in the Osaka area). There are also many sweet variants that use other materials than rice flour such as kaware senbei (just as sweet cookies), or okoge senbei (made from slightly burned rice, gives an amazing flavour).

Visit the above described stores on your visit to either Asakusa or Sendagi. 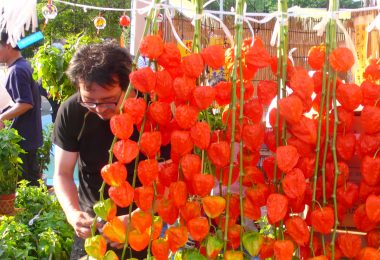 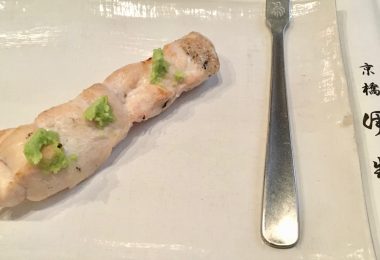