Hanami, cherry blossom viewing, is by far the most important event in the year in Japan. The blossoming of the cherry tree (sakura) is the moment in the Japanese year of new beginnings. It marks the transition between old and new, the moment when fresh graduates start their working career, the start of the new fiscal year (if you work in a Japanese company, April feels like the real start of the year) and the start of the new school year.

Sakura is Japan’s unofficial national flower, but it was not always this way. Until the Nara period (710-794) the main flower was the Japanese apricot, likely under cultural influence from China. However, in the Heian period (794-1185), sakura gained popularity among Japanese aristocrats. Hanami originated from those days, but were not the drinking parties as we know them nowadays. It was only in the mid 17th century that the custom of hanami parties started in Edo (old name for Tokyo).

Sakura just blooms for a couple of weeks during spring, this fleeting beauty is symbolic to the Japanese. As a result, sakura encompasses all aspects of life and design in Japan, from an often used pattern for kimono to the 100 yen coin.

The announcement of the start of the sakura season in Tokyo is done based on how many cherry blossoms are counted at a set of particular trees at the Yasukuni Shrine (yes, that shrine with the bad reputation). Five fully opened flowers on a tree mean that the sakura season in Tokyo is officially declared open. Why Yasukuni Shrine you might wonder? One theory is that these trees were in the vicinity to the Japan Meteorological Agency so it was easy for them to go there and check the status of these trees. This check started in 1966, when there was not yet a controversy regarding this shrine as the Class A war criminals were enshrined in 1978.

You have plenty of places in Tokyo to choose from if you want to enjoy the cherry blossoms. As that makes choosing where to go hard, there are many lists and rankings that go around to help you make your choice. Let me add to that frenzy, and give you the best places to go to if you consider the historical significance of the sakura tree in Tokyo.

Most of the sakura trees in Tokyo have been planted at the end of the 19th century. An early guide book on Japan, “A Handbook for Travellers in Japan” by Basil Hall Chamberlain & W.B. Mason published in 1901, lists Ueno, Mukojima and Shiba as the places to visit for cherry blossoms in Tokyo and points out that most of the trees were planted rather recently. For example, the cherry trees at Yasukuni Shrine were planted in 1870. However, we can go much further back, towards early 17th century.

This used to be, and still is, one of the most popular spots in Tokyo to see the “wonderful mass of cherry blossom” for which it has been famous a long time. Originally the grounds of the Kan’ei-ji temple, it became a public park in 1873. The first sakura trees were planted at this temple in 1632 and by the end of the 17th century the temple was opened to the general public (only during the cherry blossom season) by the 5th Shogun Tokugawa Tsunayoshi (1646–1709, reign as shogun: 1680-1709). The sakura trees in the central lane, one of the key attractions, are much more recent though. They were planted in 1969. Throughout the whole park around 700 cherry trees can be found and during hanami season about 1000 lanterns are hung up and light up the sakura in a magical way at night. Read more about Ueno park.

Sakura lane in Ueno park on crowded Sunday in April 2017.

Address:
Uenokoen, Taito-ku, Tokyo (see number 1 on the map at the bottom of this article)

When to best visit? Late March, early April. The cherry trees tend to blossom a little bit earlier than at other locations in Tokyo. Best time to visit is during the evening when the 1000 lanterns light up the trees. Also perfect for drinking/eating parties (please note that it might be very difficult to find a spot for such a party, there is a strict etiquette involved in order to reserve your place).

This park was opened in 1737 by Tokugawa Yoshimune (1684–1751, reign as shogun: 1716–1745), who ordered the planting of hundreds of cherry trees in order to create a place for popular outings. Different from Kan’ei-ji temple (Ueno park), people could come here and drink and eat under the trees, making this one of the first places were the custom of hanami further developed into what we experience today. There are currently about 650 cherry trees. A scene from the park has been immortalized in one Ukiyo-e from Hiroshige in his One Hundred Famous Views of Edo (1856–59). Read more about Asukayama Park.

When to best visit? Late March, early April. Perfect for a daytime stroll through this hilly park. Also perfect for hanami parties.

Tokugawa Ietsuna (1641-1680, reign as shogun: 1651–1680), is credited with planting the first cherry trees along the Sumida river. However, it was Tokugawa Yoshimune (1684–1751, reign as shogun: 1716–1745), the guy from Asukayama Park, who further gave the order to plant cherry trees from Mukojima to Senju. There are about 600 trees that you can enjoy while sitting on the river bank. Sumida Park is the central point to enjoy the cherry blossoms at the Sumida river, but you should also venture a bit further north on the East bank, towards the backside of Kofukuji and Chomeiji, and have a look at the riverbank from the Sakurabashi bridge. Read more about Sumida River Park.

Sakura in Sumida Park with Tokyo Sky Tree in the background

Address:
East Bank: 1-2-5 Mukojima, Sumida-ku, Tokyo (see number 3 on the map at the bottom of this article)
West Bank: 1-3-13 Hanakawado, Taito-ku, Tokyo (other side of the river)

When to best visit? Late March, early April. I prefer to visit this place during the day, however, night time is also quite pretty with the Tokyo Sky Tree in the background.

Other noteworthy areas with some history include Rikugien (Shidare-Zakura, the weeping cherry, a very famous cherry tree in Japan), Chidorigafuchi (one of the moats of the Imperial Palace) and Shiba Park (used to be the grounds of that other important Tokugawa temple Zojo-ji, and now offers pretty views with Tokyo Tower in the background). For general sakura in Tokyo, there are many articles, both in English and Japanese, ranking the best hanami/sakura spots in Tokyo. Meguro river and Shinjuku Gyoen usually rank very high.

Sakura at the Meguro River. 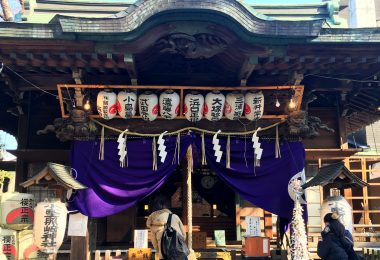 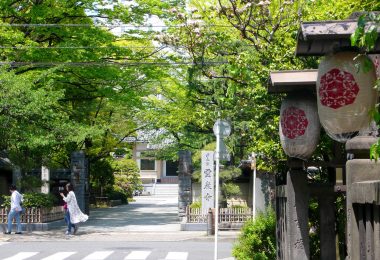