Do you want better fortune? Then join the local tradition of visiting the seven lucky gods (Shichifukujin, 七 福神) at the beginning of the year. This is called the Shichifukujin Meguri (七福神めぐり), a pilgrimage to multiple shrines/temples (for the seven different gods, usually only one god per shrine/temple), where you can pray for luck in the new year. A lot of areas in Tokyo have a course that will guide you to seven gods in their area bringing you to several shrines/temples. These 7 lucky gods are particularly popular all over the the Shitamachi areas, where you can find them being honoured at a large number of shinto shrines, and sometimes temples. As these 7 gods became associated with certain professions and arts, they are seen as being closer to the common people than other deities.

Ningyocho is famous for its seven lucky gods shrines, some of them very beautiful and all of them well-tended as they are very much alive in the hearts of the people in the neighbourhood. You will find people visiting these 7 gods throughout the whole year, not just at New Year’s. For the seven shrines below I am using the guide as it was provided outside of Suehiro Shrine. I noticed that depending on the book, website or leaflet the shrines are different (even in Ningyocho, there are several shrines for a certain lucky god, so if you want to pray to Ebisu-gami, you can actually choose which shrine to go to). It is also popular to collect stamps at each of these shrines, making it into a stamp rally. Please note that at several shrines these stamps can only be collected at the beginning of the year.

The map with the 7 shrines can be found at the bottom of this article. Suitengu Shrine has often a long line with people who want to pray on weekends, the other shrines will likely only be crowded during the New Year’s period or when a festival is taking place (each shrine will have at least once a year a festival). Interesting about this tour in Ningyocho is that you will encounter all types of shrines: new ones, old ones, small ones, big ones, and some even encapsulated into buildings.

This shrine is mainly famous for safe childbirth. You will encounter many expecting mothers and a lot of children on weekends. This shrine is actually a branch of a shrine in Kyushu (Kurume), founded after the defeat of the Heike clan at the battle of Dannoura in the 12th century. After this defeat, the then 6-year old emperor Antoku and his mother jumped to their death in the sea. They carried with them a sacred sword, to take with them to a palace they believed to be at the bottom of the sea. The Suitengu shrine was built to pray for their souls. The child emperor and water became subsequently connected to pregnancy and birth.

They have put a building over the stairs that lead you to the shrine, so entering feels a little bit counter intuitive. When you exit the station, you will see the back of the shrine, which means you will need to walk a bit along the big road and then go left in order to enter.

The front side of the main shrine building at Suitengu.

Special about this shrine: You will find a statue of a mother dog and her puppy where everyone will want a picture (it is located on the left hand side on the shrine grounds). Since the Edo period, people in Japan believe dogs bear young easily and all of their puppies grow to be strong. Also, it has been rebuilt in 2016, very new!

This shrine is located within an apartment block. Not originally, no. This shrine is thought to be around since at least 700 years. It got destroyed during the great earthquake in 1923 and again during the second world war. Popular here are the Ryomufuda, small paper notes on which your write what you wish for. You can then put them under your pillow at night, dream about them, and they will come true (no guarantee given though). For sure is that one will cost you JPY 600.

Lucky god: Daikoku-shin is the god of five cereals and wealth. However, the daikoku-shin at this shrine is very versatile and is responsible for sixteen different kinds of wishes, from business prosperity to protection from danger.

Special about this shrine: It is one of the bird shrines that celebrate the Bird Day Fair (tori-no-ichi) in November on day of the bird (in 2016: 11 and 23 November). An alternative name for the shrine is Otori Shrine (literally: big bird shrine).

A very small old shrine, at least 400 years old. Tucked between 2 buildings, the stone front fence and torii feel old. Its name is associated with an auspicious shaped fan that was found here, suehiro in Japanese, hence the shrines’ name that it received in 1675. The shrine has some great looking komainu, guardian lion-dogs, at either side protecting the shrine.

Lucky god: Bishamon-ten is the lucky god that is worshipped here, the god of victory from which one can receive virtue. In particular revered by the warrior class.

Special about this shrine: There is a very small mini torii on the left side with 2 small foxes. Very cute. See the photo at the top of this article.

This 300-year old shrine has been twice destroyed, during the great earthquake in 1923 and again during the second world war. The shrine is connected to the more impressive Kasama-Inari shrine in Ibaraki-ken, one of the three largest Inari Okami shrines in Japan.

Lucky god: Juro-jin is the lucky god at this shrine. You need to get in touch with him if you want virtue and longevity.

Special about this shrine: As with the previous shrine, there are also some cute foxes here. A troupe of very small statues of foxes can be found on the left hand side of the shrine.

This shrine was established over a 100 years ago, unfortunately it burned down during the 1923 great earthquake and was rebuilt in 1931 with earthquake resistant materials. When I visited the shrine was full of construction materials as they were preparing for the Ebisu-gami festival, held each year in October. Another festival is held each year in May.

The main shrine building of Sugimori Shrine with on the left lanterns from the festival that was taking place at the time I visited.

Special about this shrine: It has a parking lot on the shrine grounds, something that you often see with Buddhist temples in Japan.

This is likely the most beautiful of all the shrines on this walk. Again, a shrine with a very long history of about 1000 years, but it was destroyed once during the Great Kantō Earthquake in 1923. The current buildings date from 1942 and survived the air raids on Tokyo during the second world war.

The front side of Koami shrine, giving a very wooden impression.

Special about this shrine: Constructed with cypress wood and gives a very wooden impression, unlike many other shrines that are painted. While at the other shrines it is often difficult to find the lucky god, there are easy to find a small statues of Fukurokuju (the bold old guy, brown statue) and Benzaiten (the lady standing in the boat, green statue) at this shrine. The wooden engravings in the eaves are also worth to take a look at.

Chanoki shrine is a small well tended shrine. The name comes from the tea bushes that surrounded it and still do. There is no office here, which means that you cannot buy anything or cannot receive a stamp if your goal is to do a stamp rally. At this shrine the stamp is only available at the start of the year.

This photo represents everything there is to see of Chanoki Shrine, one of the smallest on the tour.

Lucky god: Hotei is worshiped as a god of luck, matchmaking, and blessing with children.

Special about this shrine: Instead of lion-dogs that are protecting the shrine, foxes are lined up side by side 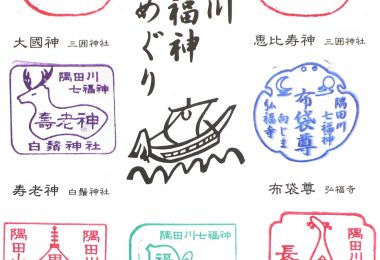 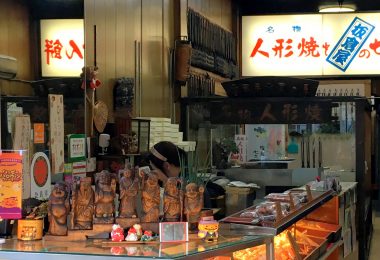 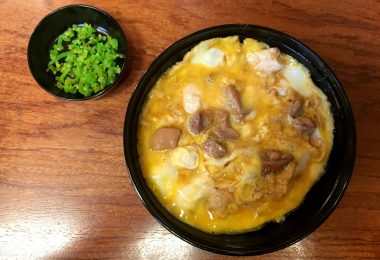